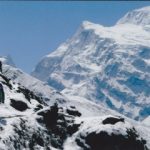 Our company  Arrange the  journey to Pisang peak which rises from yak pastures above the village of Pisang, in a uniform slope to the final summit pyramid is an undistinguished snow and ice slope. Looking from above Humde the peak is more interesting and can be seen as a curved ridge, with the face above Pisang being the truncated southern end of the mountain. This is made up of steeply tilted rock, the dip slope of which faces the valley and is well seen in this peak and the great rock  further down the Gyaru & Pisang  valley.

It has a lot of scope for exploration and pioneering, the whole of this area from western which is guarded by a hanging glacier  appear to offer a considerable challenge traverse of the whole summit ridge which connects to a more northern summit before curving back west looks a superb possibility, towards the western  ridge, however looks problematical as the ridge is guarded by a huge rock slabs, a feature on this side of the valley.

The first ascent was made solo by J.Wellenkamp in 1955 during a German expedition to Annapurna. This same expedition also made an ascent of Chulu East. From upper Pisang village ascend a path through sparse wood and pastures to a kharka at 4,380 meters , which provides a good site for base camp. A faint trail continues on open hillside, following a ridge and climbing to a shoulder on the south-west ridge at 5,400m a suitable site for high camp.

Under some conditions this may be under snow. Above, a well defined ridge leads to the final snow slope which leads quite steeply although without difficulty to the summit. Descent is made by the same route.

Actually  trekking in the Himalayas and probably in this globe offering grand views of the three highest 8000m mountain range.  Annapurna, Dhaulagiri and Mt. Manaslu range, including arrays of over 6000m snow capped peaks. The trail follows the river Marsyangdi all the way to its source at the glacial lake in Manang and beyond, the walk passes through the rural farm villages and terraced farm fields from the sub-tropic, climate to the arctic landscape and through the rain forest to the alpine woodlands.

Day 01:  Arrive at Kathmandu over night.

Day 10:  Trek towards Pisang Base Camp.

Day 12:  Climb of Pisang peak and return to BC.