Island Peak with Everest Base Camp

Island Peak with Everest Base Camp 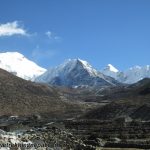 I Love Trekking Nepal Offers an mesmerizing adventure towards Everest Base Camp acclimatizing before climbing the popular beautiful Island Peak or Imja Tse (6,189m. / 20,305ft.) situated at the top of the Imja Khola valley in the Khumbu, just above the summer settlement of Chhukung, surrounded by the Imja, Lhotse and Lhotse Shar glaciers.

It offers a worthwhile challenge to the experienced winter mountaineer, competent in using ice axe and crampons, being technically straightforward.
The most difficult section being a mixed rock and ice wall at a slope of around 45 degrees leading to the narrow summit ridge, approximately Scottish winter grade 2. The climb will be undertaken towards the end of the trek when everyone will be fully acclimatized and well trained. We have reserved full seven days for training and preparation for the climb

Island Peak with Everest Base Camp trekking starts from Lukla after a spectacular mountain flight from Kathmandu. We make our way first to Namche Bazaar and after two nights here, head into all four of the high valleys.  First to Khunde and then to Khumjung valley with views of Teng Kangpoche and Kwangde, finally we trek heading for the Imja valley and Island Peak Base Camp, where we set up our own base camp at the foot of the mountain’s South ridge, surrounded by stunning ice scenery beneath the immense Nuptse-Lhotse wall which towers 9,000ft above.

The climb of Island Peak is undertaken towards the end of the trek, allowing plenty of time for acclimatisation.  Seven to eight days are allocated for the climb from base camp and high camp with full fledged training from our well experienced Sherpa guides who have scaled most of the trekking peaks and some eight Thousander giant peaks.

From Island Peak base camp descend along the Imja Khola to Dingboche and make way to Namche Bazaar, passing through Pangboche visiting the village and Gompa and at Thyangboche visit the Buddhist monastery.
After descending the hill from Namche, following the Dudh Kosi valley to Lukla where a spectacular mountain flight takes you back to Kathmandu.

Day 11:  Hike to Kalapathar and trek to Dingboche.

LOCATION: Sagarmatha National Park is located to the Northeast of Kathmandu in the Khumbu region of Nepal. The park includes the highest peak in the world, Mt.Sagarmatha (Everest), and several other well-known peaks such as Lhotse, Nuptse, Cho Oyo, Pumori, Ama Dablam, Thermasarkhu, Kwangde, Khangtiaga and Gyachung Kang. The park was added to the list of World Heritage Sites in 1979.

Wild animals most likely to be seen in the park are the Himalayan thar, ghoral, serow and musk deer. The snow leopard and Himalayan black bear are present but rarely sighted, other mammals rarely seen are the weasel, marten, Himalayan mouse hare (pika), and jackal and languor monkey.

The park is populated by approximately 3,000 of the famed Sherpa people whose lives are interwoven with the teaching of Buddhism. The main settlements are Namche Bazaar, Khumjung, Khunde, Thame, Thyangboche, Pangboche and Phortse. The economy of the Khumbu Sherpa community has traditionally been heavily based on trade and livestock herding.

But with the coming of international mountaineering expeditions since 1950 and the influx of foreign trekkers, the Sherpa economy today is becoming increasingly dependent on tourism.